A Municipal Bank Would Radiate Happiness 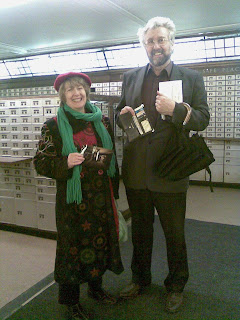 With my wife Vivienne I recently attended an open day at the former Municipal Bank headquarters in Broad Street. This was an interesting event being the initiative of local artists who used the still fine premises as the basis for showing their work. While the upstairs rooms were not accessible on this occasion, the main banking hall with its improving mottoes (e.g. ‘Thrift Radiates Happiness’) was still splendid as was the safe deposit area in the vault.
Whilst there we met people who have still retained their deposit books and former staff who used to work there. All remembered those better financial days with much fondness and would be delighted at the prospect of a re-opening.
So I was very pleased to see Cllr John Clancy’s article in this week’s Birmingham Post commending the re-establishment of the late and much lamented Birmingham Municipal Bank. Both Cllr Clancy and myself have been long term proponents of this possibility and I’ve made numerous postings on this blog to this effect.
There seems to have been a partial awakening at national level that some kind of regionalism in banking might be a good idea. In my view any such developments if they came about should not – repeat not – be left to the tender mercies of the private financial sector - to which political parties have been so wedded over the years - and which of course is primarily responsible for the fine mess that the country is now in.
These people simply cannot be trusted. There needs to be a simple and reliable service to ordinary people – especially savers. The former Municipal Bank with 40 or so branches throughout the city also issued mortgages at reasonable rates that didn’t need switching every ten minutes.
Any re-creation of this noble and thoroughly trustworthy service could also extend to the provision of finance to small businesses and supporting the issuance of municipal bonds so that local people can be part of the regeneration of our infrastructure (as was the case with the original construction of the Town Hall).
Also of course, the bank’s work should include support for manufacturing industry which was the main remit of the banks founded in Birmingham which shall be nameless now morphed as they are into unrecognisable, useless and globalised entities.
It would be entirely acceptable if a re-established Municipal Bank cast its net more widely throughout the region as suggested in Cllr Clancy’s article since ordinary people and small businesses throughout the West Midlands have been just as ill served by the bonus brigade as folk in Birmingham. If so I would suggest the name: ‘The Greater Birmingham Municipal Bank’. That really would be great and would radiate happiness more widely, but bearing in mind earlier false dawns – don’t start holding your breath just yet!