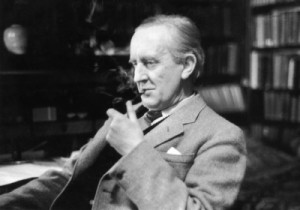 On this Thursday, January 3rd, fans from across the world will join together to celebrate the 121st anniversary of the birth of J.R.R. Tolkien. Tolkien aficionados in Brazil, the United States, Canada, Spain, Australia, Japan, Italy, and the Netherlands will be uniting with events up and down this country to hold birthday parties in Tolkien’s honour.
Tolkien himself, ever modest, would probably have been surprised by this enthusiasm and the efforts that are made by local communities to commemorate and mark his legacy.
This year, the Tolkien Society is encouraging people to read Tolkien’s 1937 book ‘The Hobbit’ in the light of the success of Sir Peter Jackson’s recently released film: ‘The Hobbit: An Unexpected Journey’. The occasion of this year’s Birthday Toast will tie together the man himself, the books and the films – the Society will be encouraging people to talk about all of these on Facebook, Twitter and on its website,   The Tolkien Society You can also be part of this at home or wherever you happen to be in a straightforward way. If you would like to join in, then at 9 in the evening by your local time, face West, raise a glass (containing whatever you like) and make the simple toast to 'The Professor'.
Birmingham is justly proud of its many close links with Tolkien and as a city we should do all that we can to increase the ways in which his unique legacy is commemorated. Tolkien was a Birmingham resident during his formative years and described himself as ‘a Birmingham man’. Each year in May Tolkien’s cultural legacy is celebrated at the unique, community-led Middle-earth Weekend that is held at Sarehole Mill.